skip to main | skip to sidebar

Auntie Em's is one of my favorite brunch spots in Eagle Rock. The food is light and has a great farmer's market / artisan vibe. There is also a great local indie rocker quotient too. Each time I visit I see friends from local bands (one of whom works at Em's on some days!) Lots of the real Eastsiders migrate from Silverlake to Eagle Rock for a meal. It's usually a bit crowded but I've never not gotten a table. Going early or a bit later in the afternoon helps.

The must have from Em's is the BLAST. The Bacon Lettuce Avacado Sprouts and Tomato sandwich is really yummy and comes on a rosemary roll. Check out the first and later pictures to see how our last BLAST wasn't quite up to our A+ expectations from before. 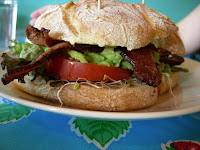 You know, after looking at those two pictures up close and on an empty stomach I realized a truth about Em's: even when not an A+, the food is still pretty solid in the B+ / A- category!

Em's is very kid friendly, with lots of booster seats. The vibe is boistrous though not deafening with self-service water and coffee stations in the seating area. I was given an Aunti Em's coffee mug as a gift, which for $5 is a deal! (T shirts are $10.)

The Auntie Em's menu is pretty varied from the BLAST sandwich to Cobb salad or steak salad. The breakfast menu and dessert menus have lots of options too.

My favorite currently is the 1/2 sandwich and 1/2 soup or salad option. Recently I got the 1/2 ACS (Avacado Cheese Sprouts) with a yummy black bean / red pepper salad. It was a great summer time lunch for sure. Ask for ice for the coffee or water. Sit in the back yard area on a nice day!

For as many times as I've been to Em's, I've coveted the deserts, which as you can see here are beautiful:

It wasn't until recently, however, that I finally tried them. I ordered a mini version of the chocholate cupcake and the red velvet cupckate (red cupcakae with vanilla frosting). They were both really good. I think I'll come back for them one time whenthat is what I am really craving. I usually eay lunch at Em's but the deserts are great. Honestly, the minis seemed like a great deal in terms of price, aesthetics (i looked forward to eating them through my entire meal) and in terms of taste.

There is also an impressive marketplace store attached to the Auntie Em's restaurant. The cheeses, preserves, etc are all locally made (by individuals) which adds to the cool artisan nature of the place. The prices are a bit high but the products seem virtually one of a kind. For a special treatI say go for it!

Check their website for new breakfast hours and an explanation of their Farmer's Market dinners (perhaps a followup post one day!)

Cost: not a bargain but not overly expensive ($20-30 for two with drinks or desserts)
Taste: fantastic
Experience: lot's of fun and one of a kind eating!

This is a Flickr badge showing photos in a set called Grub in LA. Make your own badge here.